How to play The Witcher 3 on your Chromebook

Experience one of the best single-player RPGs on ChromeOS

Have you been meaning to find out how to play The Witcher 3: Wild Hunt on your Chromebook? The prospect sounds somewhat challenging, but let us tell you here and now that it is possible to experience CR Projekt Red’s famed IP on ChromeOS. You need to pull the right strings to make that happen.

ChromeOS is no stranger to the bustling world of online gaming. We have a firm belief over the site that Chromebooks are great for gaming, and multiple instances support this statement. For starters, you can effortlessly download Steam on compatible Chromebooks now and enjoy the world of PC gaming at its core.

To find out more about that and, of course, a go-to method for getting The Witcher 3 on your Chromebook, keep reading for the best results.

Most prominent highlights of The Witcher 3

Before we get into the raison d’etre of the article, let’s take a moment to discuss some of The Witcher 3: Wild Hunt’s most celebrated features. After all, the game has been handed the 2015 Game of the Year award, so the latter must have been due to good reason.

First, The Witcher 3: Wild Hunt entails a highly story-rich gameplay design where you start your journey as Geralt of Rivia. Geralt is a Witcher—a trained combatant who has been brought up to learn how to slay monsters, use ancient magic, and go about their life as a highly skilled warrior.

In the world of Witchers exist a swath of monsters, medieval deities, and monstrosities of all sorts that threaten humanity. A Witcher takes it upon themselves as a duty to rid their place of habitat from such atrocities. Therefore, Geralt’s purpose comes across as no different.

You begin your strides like any other day but are soon led to face a formidable enemy called the Wild Hunt. The work of the Wild Hunt is bizarre, and no one survives when it’s done with a particular territory. However, Geralt, too, on the other hand, is a potent Witcher who has to embark on a carefully curated plotline to save the child of prophecy.

The Witcher 3: Wild Hunt features some of the best combat mechanics you’ll ever get to experience on a Chromebook. Not even the likes of Tower of Fantasy or Genshin Impact can come close to the level of depth offered by The Witcher 3 by its gameplay quality.

Geralt has two types of swords in his arsenal. One is a steel sword that can cut down regular enemies and foes, while the other is a silver sword that caters mainly to monsters. Switching back and forth between the two, learning new moves to kill off your adversaries, and going about the vast world of The Witcher 3 feels nothing but outright superb.

One of the best parts about The Witcher 3: Wild Hunt is its open-world setting that takes a significant while to explore entirely. Before that, however, you will need to play through particular sections of the game to unlock the game map. That can take some time to follow through with, so there’s no need to rush and feel you’re short on the clock.

Instead, you should rewind, relax, and immerse yourself into the beauty of The Witcher 3: Wild Hunt. The latter is a masterful experience waiting for curious players to get in and step into the boots of Geralt of Rivia.

To talk about the world environment of The Witcher 3, the IP features exciting changes to the overall weather system. The dynamism is thoroughly admirable as you experience on-the-fly alterations to the weather. One moment it’s sunny, but the next, water is pouring down the in-game clouds, leaving Geralt in a rainy miasma polluted with the blood of monsters.

At distinct points during your overall gameplay of The Witcher 3, you’ll come across a big deal of sections where the choices you will make will have good and bad consequences. Therefore, the title’s story is highly interactive and always has you coming to it for more.

Playing The Witcher 3 on a Chromebook

The Witcher 3: Wild Hunt can be played on Chromebooks due to the courtesy of the Steam launcher that has seemingly made an impact on ChromeOS. This project was long-standing and had been rumored for an extensive time, only to see it coming true and making its place on Chromebook.

With that said, though, the project is still in the works, so you probably won’t be able to experience the same Steam features on ChromeOS as you would on a Windows PC. The variant of the world’s best PC gaming launcher introduced to Chromebooks is “Alpha,” so you can comprehend the nature of the situation from that word alone.

Now, since Steam alpha for Chromebooks is something that needs consistent work, feel free to provide feedback to the developers of the prospect—they’re going to embrace it gleefully. Moving forward, there’s something highly important that you need to understand regarding the onset of Steam on ChromeOS.

You need compatible Chromebooks to be able to play games on the launcher. Not all Chromebooks currently have the capacity to download and install Steam. While this is a bummer to many, it’s necessary to ensure quality control. Steam alpha is now available for a select number of Chromebooks only.

Therefore, before you attempt to play The Witcher 3 on your Chromebook, ensure you have one of the following devices. This is a list of those Chromebooks that have been tried and tested to run Steam. Please note that the list is inconclusive and more additions will flow to it upon successful trial and error.

With that said, the latter is one-half of the whole scenario. There’s another facet you must be wary of the configuration. Even if you have a supported Chromebook, the next step is to check the device for the following hardware specifications. If you don’t have them, you won’t be able to luck out, unfortunately.

Therefore, if you’ve got your hands on a supported Chromebook that manages to tick off the specification requirement just as well, feel free to keep on reading and enjoy the very best Steam offers. We also encourage you to check the Steam on ChromeOS Alpha page on the Chromium Projects from time to time for any updates.

Lastly, this is as far as you can come without a supported Chromebook for playing The Witcher 3. We suggest upgrading to a device that currently houses the functionality or waiting for more devices to be added to the compatible Chromebooks list.

Let’s dive further into the article and determine the exact process that you’ll use to install Steam alpha on your Chromebook without any more ado.

How to install Steam alpha on ChromeOS

The steps will take you through the complete installation of Steam alpha on Chromebooks. But before that, here’s a word to the wise: Installing Steam alpha warrants you to Powerwash your Chromebook. Doing so is bound to erase all locally present data on the device. Ensure a swift backup for anything of substance before moving forward.

1. The first step is to change your device to the “Developer – unstable” release channel. This can be done by going into your Chromebook’s “Settings,” selecting “About Chrome OS,” and then clicking on “Additional details.” For more details and a step-by-step guide, check out how to change release channels on Chromebook. 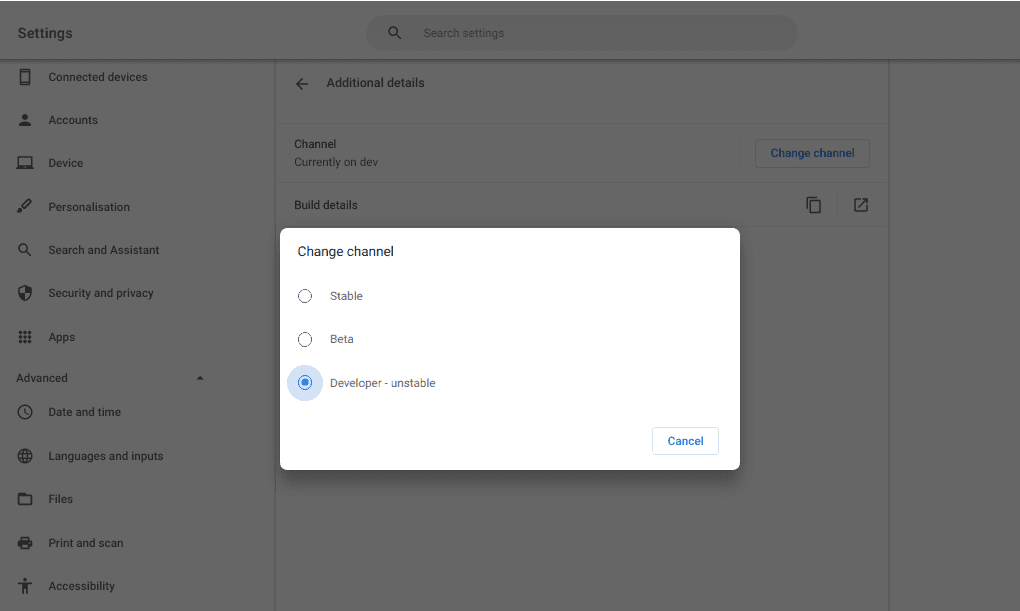 2. As soon as you’re done with the initial step, you will be required to Powerwash the device. Follow the instructions you’ll be given on the screen from that point onward. As soon as you’re finished, you should be able to boot back into the main ChromeOS interface.

Your next task is to fire the Chrome browser, type in “chrome://flags” into the address bar, and press the “Enter” key. As soon as the “Flags” window pops up on your end, use the search bar to look for the following two features.

3. Next up, Crosh, the ChromeOS developer shell, will come into play. The program exists within the Chrome browser and can be used to input various commands, similar to how the Crostini Linux terminal operates. Press “Ctrl,” “Alt,” and “T” together while inside Chrome to open up Crosh.

Once you get that done, use the following command to install the Steam launcher on your end. Again, you’ll need to comply with what the terminal asks you, and things are bound to be sorted.

4. To top it off, you must proceed with an utterly simple task. Sign in to the Steam launcher app that should be installed on your Chromebook at this point. You will use the same sign-in data on your other eligible devices. If you forget your password, try logging into the official Steam website to recover your credentials.

You should now be able to have the Steam alpha app running on your Chromebook. Time to purchase The Witcher 3 and start playing away.

Playing The Witcher 3 on Steam Alpha

The Witcher 3: Wild Hunt is a AAA title with a price tag. It’s not on the level of free-to-play Play Store games, so that point is understood. Now, to purchase it, you can head over to the official game page on the Steam website and get it from there. You will need to sign into your account to get going with the process.

The best part is that the game is currently 80% off on Steam, so you can save good money and experience the high-end title in equal measure. The base $20 price has been slashed off to give users a whopping deal of $3.99. The title’s Game of the Year Edition is also up for sale and only $1 above the original title.

It’s possible to add the game to your cart, as shown in the screenshot below, and follow up with the purchase accordingly. Again, sign in with your credentials to get the job done and seemingly add the title to your catalog on the ChromeOS Steam alpha application. Things are only going to get smoother from here on out.

Adding The Witcher 3: Wild Hunt to the cart

Please wait until the download finalizes before you can start playing it. Once you’re notified that the installation was successful, proceed toward launching The Witcher 3: Wild Hunt. Time to get into this brilliant adventure and have one whale of a time on your Chromebook.

The Witcher 3: Wild Hunt on ChromeOS

The Witcher 3: Wild Hunt is easily one of the best games ever made to date. There are seldom other RPG titles that can boast the same level of quality as this one, so it’s no surprise a Chromebook owner would want to try and get it on their Chromebook.

Do let us know in the comments section down below whether you liked The Witcher 3 on your end or not. As always, Chrome Ready wishes you good luck!

How to customize keyboard on a Chromebook

How to create shortcuts on external keys on Chromebook