How to install and play Alto’s Odyssey on your Chromebook

ChromeOS has never seen a game so captivating before

Have you wondered how to install and play Alto’s Odyssey on your Chromebook? You’re looking for the correct type of title to play your heart out on ChromeOS, given the stature and overall playability of the IP. Keep reading to discover what process can help you get this fantastic action game on your desired platform in no time.

At Chrome Ready, we firmly believe ChromeOS is great for gaming. The operating system can not only manage to run the best racing games you can play for free, but also snake games, Nintendo DS games, and even T-Rex games, for that matter. Wondering what else it can do? It’s even possible to experience all the best Mario games on your Chromebook.

Chromebooks are no stranger to gaming. The focus of the phenomenon has constantly been elevated on ChromeOS little by little, and today a select number of devices even have in-built Steam support. For now, though, let’s go ahead and talk about Alto’s Odyssey, the game’s best features, and its installation procedure on a Chromebook.

The following is our round-up of the best features that millions of Palo’s Odyssey players enjoy.

A panorama of scenery

Alto’s Odyssey is one of the best-looking Android games that one can download and play from the Google Play Store. It feels exceptionally optimized for the operating system and truly sets the tone in tandem with the rest of its core functionalities. That is to say; there’s never a dull moment in Odyssey when you set out to play it.

The action-adventure side-scroller will have you sliding through various biomes, including canyons, temples, dunes, and more. Each of these distinct areas features its class of vigor and appeal, thereby making the playthrough ever enjoyable. Odyssey’s sheer standard of versatility is too good to pass up.

Alto’s Odyssey takes pride in the fact that learning is pretty effortless. There is only a handful of controls that you must know to make progress in the game. However, since it is classified as an endless-runner, you’ll need more than just a rudimentary skill level to make strides in Alto’s Odyssey.

Apart from being easy to learn, the game is pretty hard to master. You’ll need to understand the way obstacles work and how you can avoid them on the fly when things get intense. Instances such as these will come to the player over time, so it’s only a matter of practice.

Alto’s Odyssey is a game so gorgeous that the developers saw it fit to create a dedicated photo mode just for it. There are multiple moments in every session where you’re just taken aback and baffled by the absolute serenity of the game. In times like those, it’s best to whip out the in-game camera and capture the juncture.

The game’s “Zen Mode” is a different take on the adventures of Alto. This is a distraction-free way of playing the game where you won’t be met with any scores to keep track of nor any power-ups for idiosyncratic advantages. It’ll be just the experience you’ll enjoy here without needing to satisfy your sense of accomplishment.

The Zen mode even has its soundtrack that the developers curated explicitly for it. You have to give it a shot on your Chromebook to embrace the stunning visual quality of Alto’s Odyssey and enjoy what is otherwise one of the best Google Play Store games ever made.

One final point before we set off toward the game’s installation is the soundtrack of Alto’s Odyssey. The game’s developers advise every player to use a headset or an earbud for a superior gameplay experience. That way, you’ll be able to fully immerse yourself in the relaxing music of the adventurous side-scroller.

Alto’s Odyssey can effortlessly be installed on ChromeOS from the Google Play Store. However, ensure the system utility is already activated before you start.

Furthermore, if you’re using a dated Chromebook model and haven’t used Google Play before, check out our curated guide on Chromebooks that run Android and Linux apps.

You’ll be able to confirm whether your device even supports the functionality of Google Play in the first place or not. With the latter out of the way, it’s finally time to get into the installation steps of Alto’s Odyssey.

1. The first step is to launch the Google Play Store app on your Chromebook. 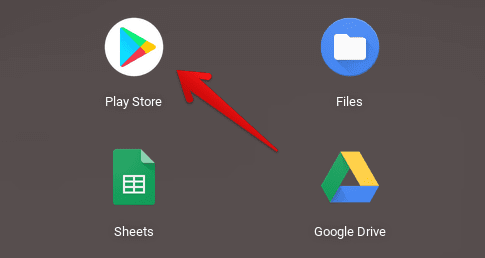 2. To continue, type in “Alto’s Odyssey” in the search bar that you see within the app and press the “Enter” key. Alternatively, feel free to use this direct link as well to get straight to Alto’s Odyssey’s app page.

3. After pressing the “Enter” key, you’ll see the game’s app page on your Chromebook. Use the “Install” button there to get going with the download.

4. Wait until the download finishes. Once it’s done, head over to the Chromebook Launcher area to spot the game downloaded. The app icon should look similar to the one in the screenshot below. 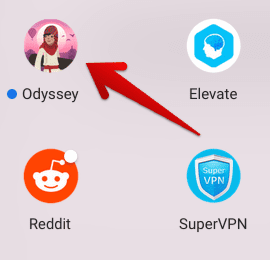 You’ve successfully installed Alto’s Odyssey on your Chromebook. Let’s fire it up and take it for a spin.

How to play Alto’s Odyssey

Getting started with Alto’s Odyssey

The image above shows how the game welcomes you when launching it. The soundtrack is serene, the visual quality is appreciable, and every aspect of the game has been put together so well that it’s no less than a treat to play it on the big screen.

After you tap on the screen with your Chromebook’s trackpad, the game will smoothly transition into a playable state, where you’ll be met with an introduction. The initial phase will aim toward teaching you the basics of the game, so you must follow along diligently for the best results.

Playing through the tutorial

Even the starting tutorial illustrates that Alto’s Odyssey is beautiful, let alone the sceneries that are bound to come ahead. Some of the things we picked up during our time with the title are that the IP is totally optimized to run for Chromebooks, and it’s not quite resource-intensive either.

This means that even if you don’t have one of the most high-performance Chromebooks, the title will be able to run just fine. Little things like these show the effort the developer put in making the game, and with Alto’s Odyssey, you won’t ever have to doubt the quality.

Now that we’ve shown you the exact process of downloading and playing the game, we leave the rest in your hands. Do share with us your experience by reaching out and describing what it felt like enjoying Alto’s Odyssey for the first time. With that said, the time is nigh to conclude the article now.

Chromebooks are slowly climbing up the ranks of being recognized as gaming machines in the ripe tech-forward age of 2022. However, they’ve still a long way to go before comparing them, and Windows PCs can be appropriately drawn.

Still, with the likes of Alto’s Odyssey prevalent on ChromeOS, we reckon the wait won’t be as arduous as we initially thought. Do let us know down in the comments section whether this guide came in handy for your cause. Chrome Ready wishes you happy gaming!

Top 10 shopping apps in the USA for your Chromebook