There are many times when we’d like to just sit back, relax, and unwind. If there’s something that could divert our attention and distract us from the constant struggle of life, it’s video games. Perhaps, their captivating nature has led gaming to become a billion-dollar industry.

Chromebooks, subsequently, are no exception to this digital amusement and comprise a plethora of ways you can use it for gaming. You could set up Steam and play top-notch Steam games on your Chrome OS or get the best out of Linux for this matter. Either way, what you’ll be requiring is a stable internet connection that’s going to fuel your Chromebook with the speed it needs.

In this article, therefore, we’ve compiled the best offline Chromebook games that you can play without connecting your device to the internet. Stick around for the finest entertainment that Chrome OS has to offer. 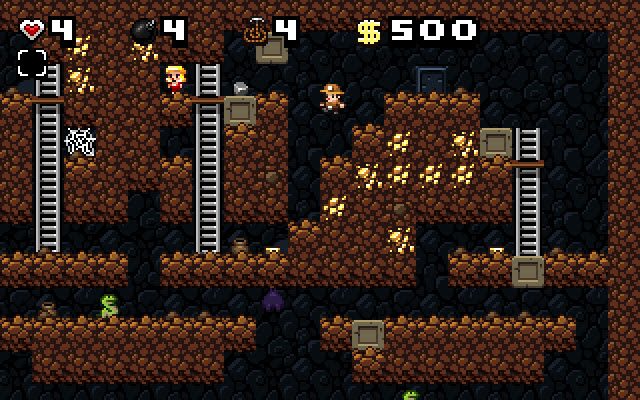 Starting this list of offline goodness is Spelunky – a pixelated 2D cave-explorer that’s driven with inspiration from classic platformers. The game is free-to-play and runs offline on your Chromebook perfectly. This treasure hunting game’s design is outright minimalistic, yet the graphics are amusing enough to keep you glued. Moreover, you’ll notice how Spelunky is similar to other roguelikes – a subgenre of role-playing games that focuses on dungeon crawling gameplay such as this one, and other similar elements like tile-based graphics and randomly generated levels.

The main objective of your character in Spelunky is to, somehow, find the “Colossal Cave.” A hazardous yet equally rewarding area that’s buried in the deep underground. Jump, run, and crawl your way through hordes of caves till you get to the jackpot. Each level layout’s goal is to have the maximum amount of treasure collected, and that’s what you’ll be doing the most in Spelunky.

You’ll have to use your wits and charms to survive each round of this adventurous platforming game. You’ll often see yourself using several items that Spelunky gives you to best your foes and make your way to the next level. Furthermore, the game is filled with interesting and tricky puzzles to make sure the fun never stops, and you’re constantly engaged. Originally, the game was made by Derek Yu, but Darius Kazemi gave Spelunky an appropriate overhaul so it can be played on Chromebook as well. You can download and install the game on the Chrome Web Store. 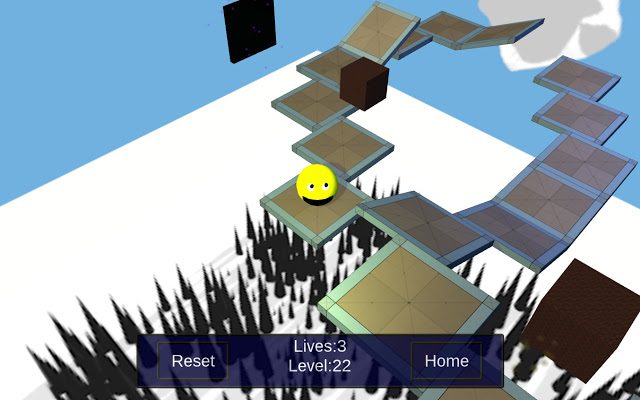 Marbleous is quite a cut above from what you’d usually play on any given device. What we’re talking about actually is a unique game that doesn’t witness any rivals in its position. The game is a mini-sized platformer with a hint of RPG elements vastly incorporated. The aim of the game is to take control of a marble-shaped character and steer it to victory. To date, Marbleous features 30 exciting levels, each one packed with fun-filled splendor and enthusiasm.

This game is perfect to kill some time on the fly. More often than not, you’ll notice yourself doing your best to clear a level that’s become very difficult suddenly. Marbleous has a knack for pulling stunts like that. The game gets harder and harder as you coarse through mazes with your humorous marble. There’s also an engaging storyline to keep you gripped as well.

To talk about the build of this game, Marbleous has been coded with WebGL and made using the PlayCanvas game engine. This ensures butter-smooth physics and a hindrance-free playing experience. Furthermore, the developer consistently listens to the feedback provided and works to deliver what the users want. For instance, the most recent update has allowed gamers to save their difficulty, sound, and music preferences without changing them every time they launch the game. Get this marvelous fun rolling through the Chrome Web Store. 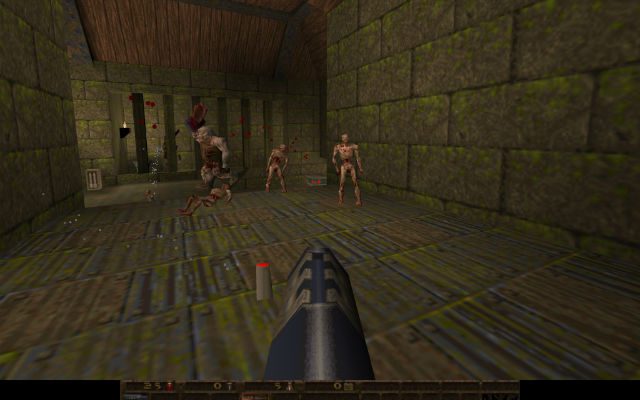 Next up is truly an iconic video game that’s been given a bit of retouching, in this case, for Chromebook compatibility. Web Quake is based on the eponymous “Quake” – a first-person shooter made and developed by id Software that became one of the most influential games of all time. This all-time classic was actually one of the first to feature all-out bloodshed and full-fledged gore. This is why Quake will always be crowned with legendary status.

Many sequels, standalone games, spin-offs, and even prequels have birthed from Quake. Therefore, a version that can be played on Chrome OS didn’t seem impossible or let alone any difficult.  Web Quake has launched as a free-to-play for Chromebooks that can be downloaded and played offline with ease. However, for those interested in PvP competitiveness, there’s a multiplayer mode as well where you could connect to the internet and battle it out in a free-for-all rampage.

A JavaScript version of the game such as this is bound to be unstable at first. Thus, the devs have kept releasing updates containing patches, bug fixes, and overall improvements to the game always to stay playable. Web Quake will give you the thrill that you’re looking for, rest assured. This action-packed FPS has been set using a retrograde theme, where along with the graphics, fits in quite deeply with the general gameplay. Since this is a pioneer for many shooters that we see today, Quake might not appeal to those suited to modern FPS games. Apart from that, it’s still one of the best classic games out there. Get it for free on the Chrome Web Store. 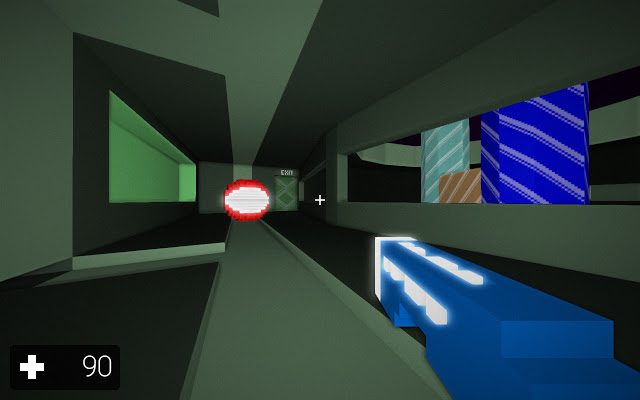 Gorescript Classic for Chrome OS is another worthy mention on the list that’ll make you spend your time in utter entertainment like no other. This is a fast-paced, 90’s-style first-person shooting video game that blends essential elements from the likes of DOOM, Quake, and Minecraft. Similar to these games, Gorescript Classic boasts a retro environment with a touch of classic rehabilitation.

What’s quite special about this shooter is the fact that it involves modernized graphics despite collecting hints of other iconic games. This makes Gorescript Classic a quirky breed and puts it inside a league of its own. What all classic games share except for their fame is pixelated graphics. The title in question strays far away from the stereotype and creates something else for us gamers out there – a chance to relive FPS glory with a spice of present-day improvements.

Gorescript Classic features non-regenerating health, ammunition scavenging, a non-linear level system, an automap, and a cheeky way of shooting your enemies while sprinting, termed as “strafe running.” This amalgam of modernized gameplay with voxel graphics makes the game worthwhile to try. Get it for free on the Chrome Web Store. 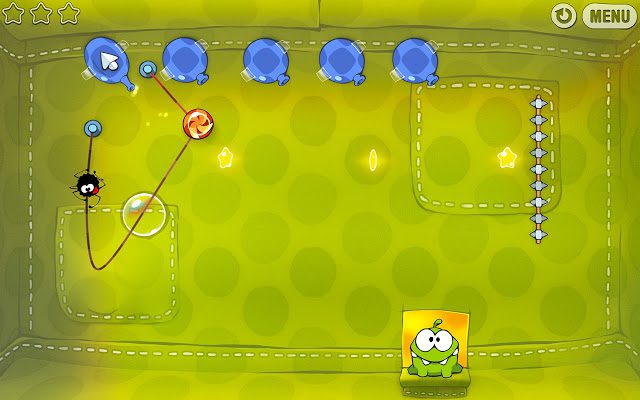 “Cut the Rope” is nothing less than an award-winning classic that made its debut in the digital space way back in 2010. Since then, it has received sizeable critical acclaim and has many distinctions to its name as well. Playing the game, one can easily see why it has over 50 million downloads. It’s one of those games that tell you what to do from the first minute, but extreme variations and fascinating changes make the overall experience very addicting. “Cut the Rope” is no stranger to mobile gaming, but with a free-to-play offline version on Chromebook, the fun has just seemed to up its game.

In “Cut the Rope,” all your efforts will go towards feeding Om Nom – the featured fantasy mascot of this first-rate game. On your very first level, you’ll see how candy dangles from a rope, and this cute, chubby guy sits beneath the delicacy, waiting for you to cut the rope and send the candy straight into his oversized mouth. As you begin to advance more and more levels, the game won’t take long to become more difficult.

However, more difficulty equals more fun in “Cut the Rope.” This is due to the courtesy of a brilliant physics engine that powers this game, making it much fluid and true-to-life – although nothing else is true to life about “Cut the Rope.” This BAFTA winner also receives constant updates from making it even smoother for your cause. Since it originally came out as a mobile game, you can use the Google Play Store of your Chromebook to install “Cut the Rope” as well. We, on the other hand, recommend that you download it from the Chrome Web Store. 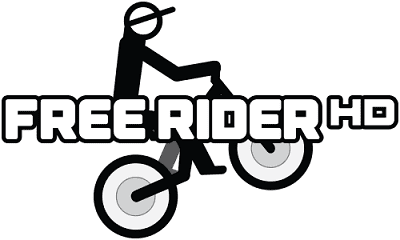 Something different from the usual stuff, Free Rider HD puts creativity on the driver’s seat and lets it decide what to do next. That wasn’t an overstatement, but merely the concept of this game. What you get to do is race your bike on tracks that have been made by other people or by you. You heard that right. The game lets you design levels and make them just the way you want. For this to happen, the game gives you access to several tools, such as drops, loops, jumps, climbs, and a whole lot more. In the offline version, you get a tool for setting the grid, 2 bikes, 6 power-ups, curved and straight lines, and an option for importing tracks.

Furthermore, you can also export your fun tracks to Free Rider HD’s official website as well. This is from where other players will be able to import your tracks and join in on the mutual merrymaking. The game’s predecessor was Canvas Rider, which has now been openly replaced by Free Rider HD instead. It also includes an enjoyable campaign where 80+ tracks await your presence to hand you your Bronze, Silver, or Gold medals. The track library of other players has grown enormous, and now there are more than 50,000 tracks that you can ride your bike on.

The game also offers fun ways to customize your bike and rider alike in the “Shop.” Entertaining ragdoll physics makes everything even more entertaining, and the fact that it is fun to play but hard to master is outright awesome. However, Free Rider HD is much more than just a game. As a matter of fact, it’s a learning tool that has helped students in classrooms better develop persistence and also made them able to grasp basic science concepts much more efficiently. Apparently, creating tracks using your intellect forms a connection with programming logic, allowing the child to participate more actively. Get this amazing game on the Chrome Web Store.

Video games hold the potential to be anyone’s favorite pastime hobby, and with titles like these, it’s tough not to delve inside and kill a few hours. After all, everyone could use a break once in a while, and not many would have the resources required to utilize those breaks fully. That’s why we’ve gathered the best Chromebook games that run offline easily and do not require a good internet connection, except only for when you’re downloading them. Better yet, they exhibit a refreshing environment and are sure to loosen you up. Chrome Ready wishes you happy gaming!

What is Wi-Fi Sync, and How to Set it Up on Chromebook

Ways to Delete an App From a Chromebook