CES 2023: Here’s what’s in for Chromebooks and ChromeOS

In case you missed the big event, here's everything of significance from CES 2023 regarding Chromebooks and ChromeOS.

CES 2023 has recently wrapped up, bringing quite a flurry of excitement. This particular event spanning multiple top-tier tech manufacturers, usually offers ChromeOS fans something. Still, this time, it appears that some of the developers have gone all-out with creating some truly amazing-looking Chromebooks.

It’s easy to speculate that these are the devices in the ChromeOS space that people will be talking about for the years to come. In this article, we’ll be overviewing the CES 2023 event and talking about some of the most prominent Chromebook developments that surfaced in the wake of it.

Let’s dive right into this guide with a brief introduction to CES 2023.

CES dubs itself the “most influential tech event in the world.” It takes place every year, usually at the start of January, and hosts some of the biggest tech companies in the world.

The purpose of CES, or in other terms, the Consumer Electronics Show, is to provide a platform for popular international distributors and retailers, such as HP, Lenovo, and Asus, to showcase their upcoming tech products, such as new devices, so the world can know what to expect from these high-class manufacturers moving forward.

CES has always been highly beneficial for ChromeOS. The top-ranking Chromebook manufacturers of our time have most impressed the ChromeOS user base with the latest and greatest in terms of their innovative capacity. CES has been occurring in Las Vegas, Nevada, for the past multiple years.

However, that does not apply to 2021, when the novel Coronavirus outbreak took over the world by storm, thereby making all in-person events recede to going digital. In 2022, however, CES returned to the forefront of the industry, but it still couldn’t offer a full-scale experience because of the pandemic’s after-effects yet again.

This year, thankfully, things have gotten off to a great start. CES 2023 is currently happening, and Chromebooks have already stolen the show. If you’re interested in learning what the ChromeOS space has achieved in this event so far, read on until the end for the best results.

CES 2023: How ChromeOS has grabbed the spotlight

At CES 2023, multiple manufacturers have come forward with their innovations of the year, including HP, Asus, Acer, and Lenovo. While a ton of announcements were made at the event, we’re only filtering the most noteworthy ones to ensure you don’t miss out on anything substantial. Let’s go over each significant development one by one.

If you thought that the HP Chromebook Elite Dragonfly was one of the most substantial marvels in the ChromeOS space, you have another thing coming now. Being a manufacturer that has created some of the best Chromebooks in the business, HP is always looking to outclass its competition, and we can safely say that it’s done that for now. 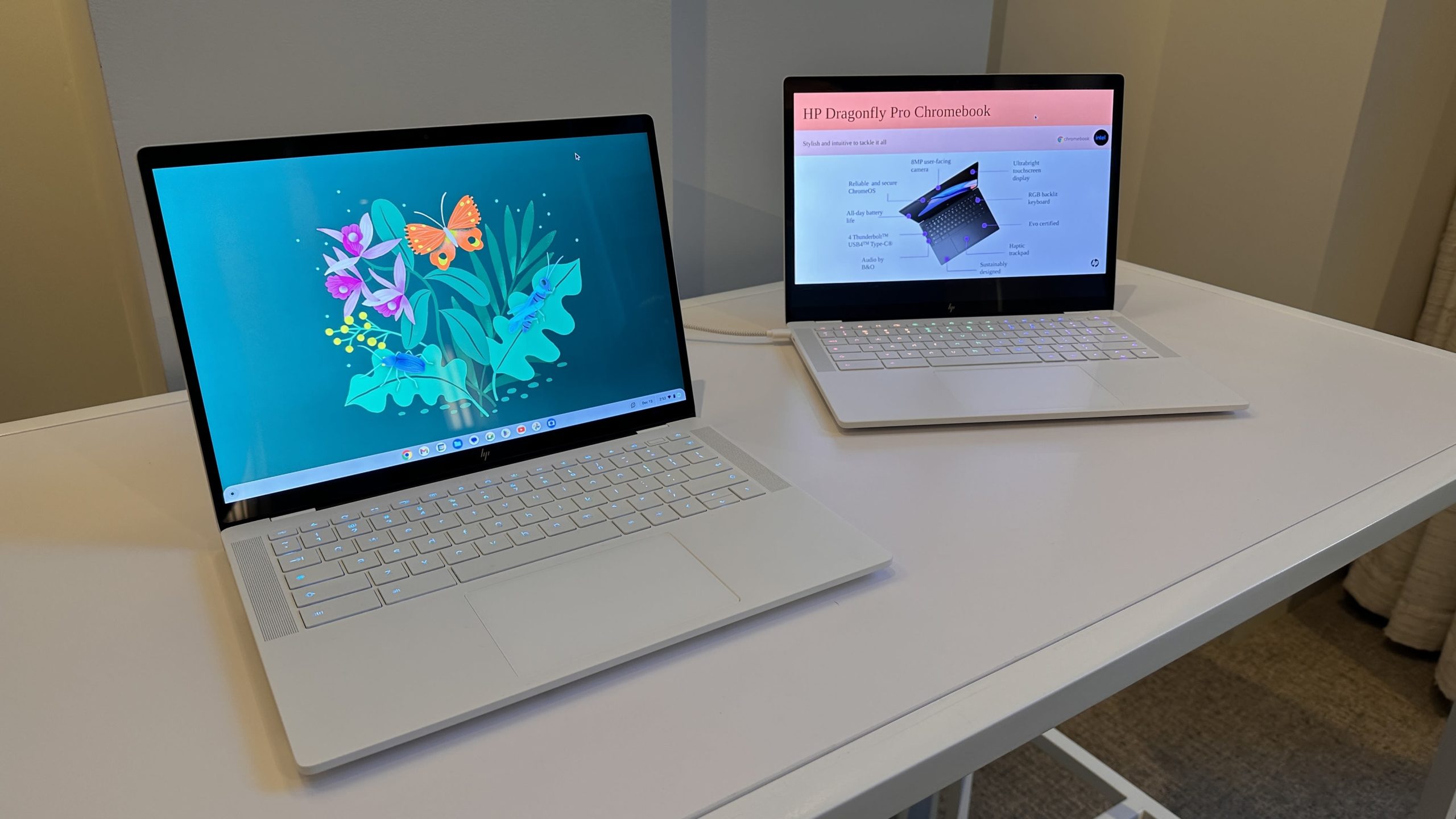 Enter the HP Chromebook Dragonfly Pro, a state-of-the-art Chromebook with many rip-roaring features and not just one. For starters, it comes with an 8-megapixel front camera, which, to our surprise, is nothing that the domain of Chromebooks has ever seen before.

Moreover, the device’s build comprises 70% recycled metal and about 20% recycled plastic, so it’s undoubtedly an environment-friendly object that we’re dealing with here. With that said, these are the least impressive parts of the Dragonfly Chromebook Pro; we’re just starting yet.

The main aspect where this specific Chromebook stands out is its maximum capacity of 1,200 nits of brightness, leading HP to claim that the Dragonfly Pro sports the brightest screen out of all other Chromebooks manufactured to date. There’s also the added capacity of the device to feature a multi-touch display.

The Dragonfly Chromebook Pro has a 14-inch screen with a whopping 2560 x 1600 resolution display. As far as the initial impressions from CES 2023 are concerned, the colors truly pop out and look nothing but fantastic day in and day out.

We will write a review article on the device as soon as we get our hands on it, so do stay tuned for that in the coming months. In the meantime, you may check out some of the other best HP Chromebooks to learn what the developer has been up to for the past years. 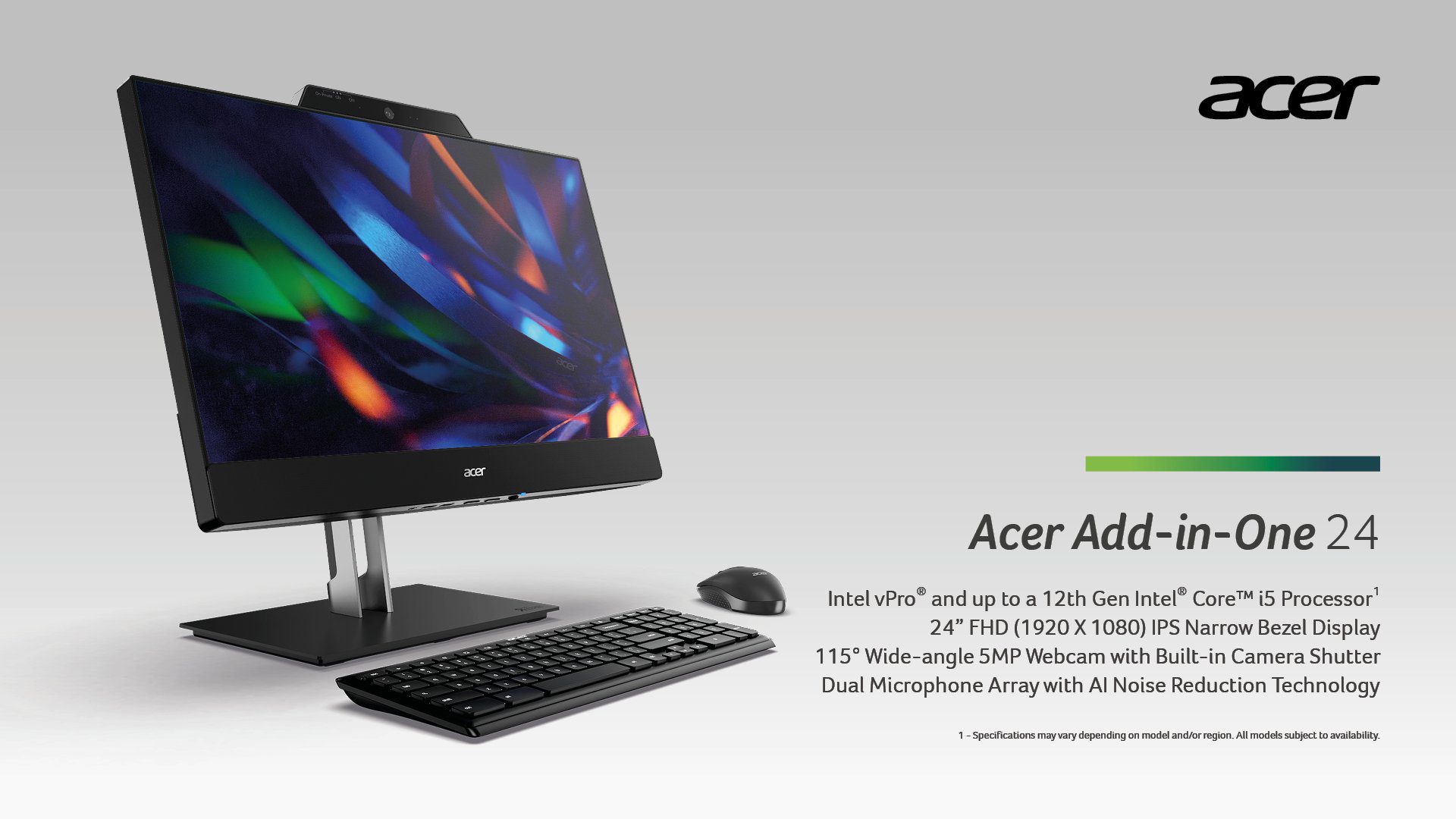 Chromeboxes had long gone out of fashion, considering how even the best Chromeboxes up until now feature relatively dated hardware. However, that is due to change as Acer — the world-renowned Taiwanese tech giant — has announced the Acer Chromebox CXI5—a new, fully decked-out Chromebox that packs the ChromeOS desktop hardware users were yearning for.

Therefore, it’s easy to determine how the latter is geared toward organizations, businesses, and enterprises looking to power their IT departments with best-in-class ChromeOS hardware. That is to say, the duo of these devices can work with 12th Gen Intel Core i7 processors, not to mention the foretold Intel vPro for enterprise users.

If that isn’t enough to tickle your pickle, let the Acer Add-in-One 24 option offer a glaring solution to your workspace needs. This is an all-in-one bundle of hardware that comprises not only one of the Acer Chromebox CXI5 or the Acer Chromebox Enterprise CXI5 but also a fully modular, 24-inch FHD monitor.

The monitor even sports additional features, such as a 5-megapixel 115-degree wide-angle webcam with an in-built privacy shutter to help you dominate your workspace meetings via Google Meet on the fly without breaking a sweat. The developers have revealed that the Acer Chromebox CXI5 will start at $289.99 in North America.

Moreover, the Add-in-One 24 monitor and Chromebox combo will set users back about $609.99. Please be advised that these devices’ exact pricing and availability will vary, so you will need to wait for full disclosure. The Chromebox and Add-in-One 24 will be released sometime in the first quarter of 2023.

Asus focuses on cloud gaming with the Vibe CX34 Flip 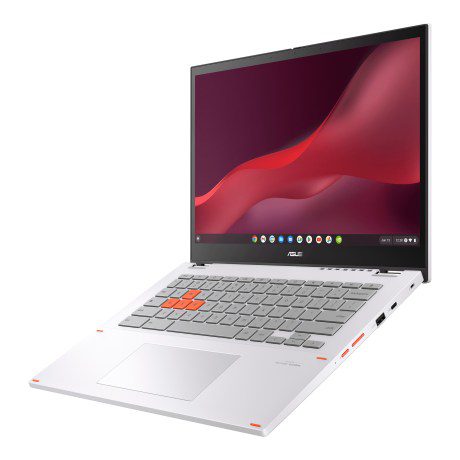 Asus knows how to bring some finesse to the game, and this time at CES 2023, the Taiwanese manufacturer has seemingly gone all out in terms of exhibiting its creativity. Asus unveiled the Vibe CX34 Flip at the well-grounded occasion of CES 2023, making the ChromeOS space more inclined toward cloud gaming and gaming in general.

Not only is the Vibe CX34 an exceptionally aesthetic Chromebook that certainly has the looks going for it, but it’s also one of the most robust proponents of the ChromeOS space. The device boasts tip-top hardware that encompasses the likes of a 12th Gen Intel Core i7 processor with Intel Iris Xe Graphics, 16 GB of memory, and 512 GB of SSD storage.

Of course, it doesn’t take a genius to acknowledge the working capacity of these technical specifications. The Vibe CX34 also exhibits a gaming-ready design, color-blocked WASD keys, and an outright terrific color scheme. Asus advertises the battery runtime to be ample, with the CX34 Flip lasting around 10 hours on a single full charge.

Last but not least, what takes the cake here is the 144 Hz refresh rate of the Chromebook in question. Most cloud gaming streaming services, such as Nvidia GeForce Now, max out at 120 Hz. This makes the CX34 more than comfortable in terms of providing users with the best possible cloud gaming experience.

Oh, and there’s also Wi-Fi 6E connectivity to help you stay online with little to no speed lags, connection drops, or anything of the like. This is one of the few Chromebooks that we’re genuinely interested in seeing more of, and we’re sure other individuals with a proclivity for gaming have the same thoughts.

Lenovo flexes the Flex 3i Chromebook 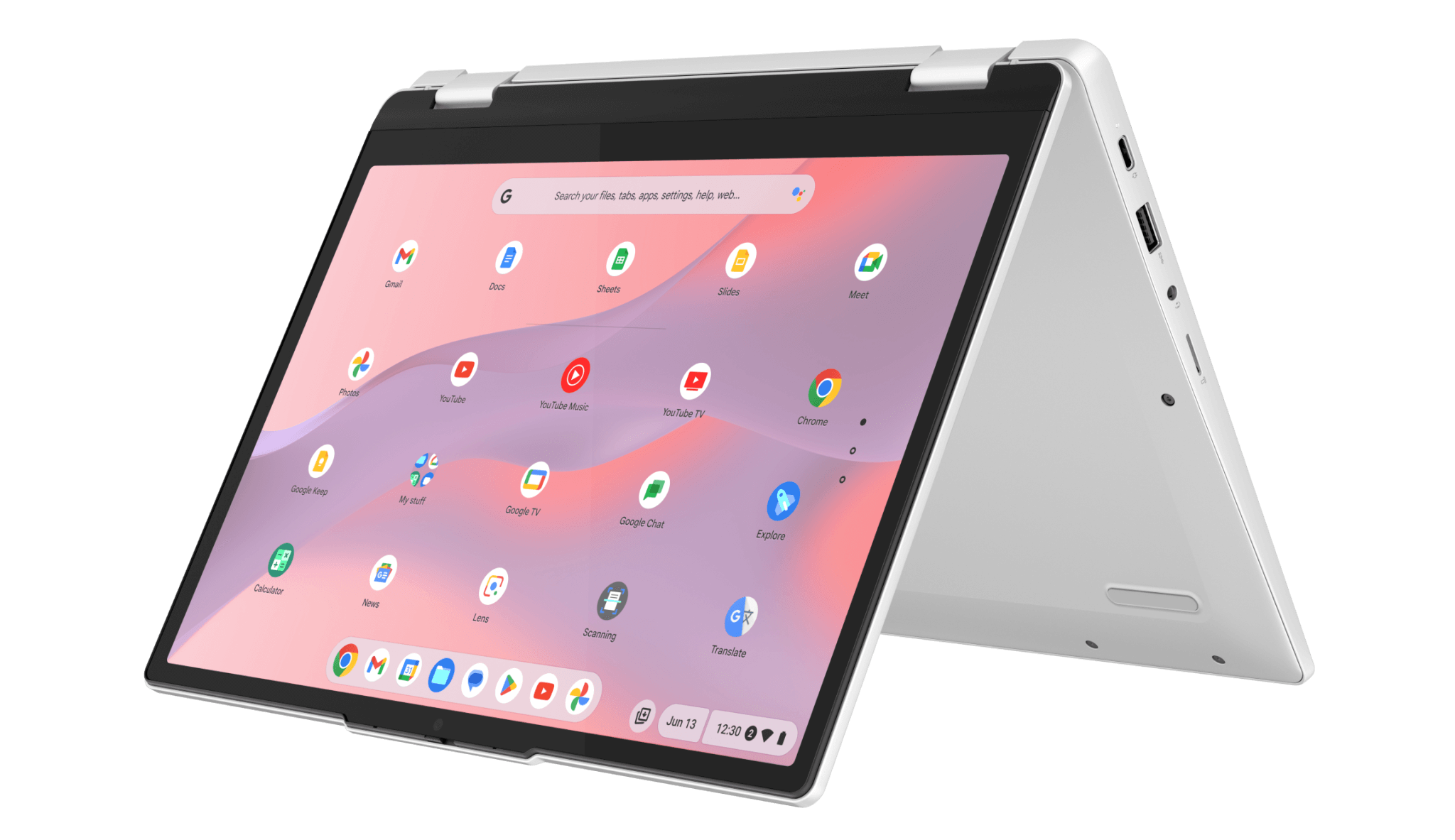 The popular developer of the Chromebook Duet also had a place to its name at CES 2023, and Lenovo has availed of that in the right way. The Lenovo IdeaPad Flex 3i Chromebook is just what one would expect from a device coming out of the gates of Lenovo. Small, lightweight, compact, sturdy build, and incredible display quality are part of the Flex 3i Chromebook.

In addition, the device uses a multi-mode design, so do expect all the flexibility in the world with this device as you get into it. Sporting Wi-Fi 6E for heightened connectivity, just like the HP Dragonfly Chromebook Pro, the N-series Intel processor introduced in the device is reliable, speedy, and utterly capable.

As we get more and more into the year, the developers will feel comfortable enough to reveal the prices of all these devices. The recession has hit the world’s businesses and organizations badly, and it’s likely that they won’t give an answer until the current conditions come to some sort of conclusion.

With that said, this is a wrap of CES 2023. We do hope that you’ve found this guide useful for your cause.

CES has always managed to impress with its massive scale of technological outreach, but this time in 2023, it was none other than Chromebooks stealing the whole show. From gaming-centric Chromebooks to revamped Chromeboxes, the remainder of the year will be a blast for the ChromeOS user base.

Our personal reveal of the whole event was the HP Dragonfly Chromebook Pro—the follow-up device to the first HP Elite Chromebook. With the arrival of such a standard in the Chromebook space, ChromeOS is indeed venturing to greater heights with time, and this monster device by the US-based developer is sure-fire proof of just that.

Do let us know how CES 2023 has fared for you in the comments section. As always, Chrome Ready wishes you good luck!

How to set up NFC contactless payment in Google Pay